“Industrial production is the vanguard of the national economy, providing employment for the population, a source of enrichment of the state budget and, ultimately, the most important factor in solving social problems.”

Engineering management, military-chemical industry, together with industry enterprises, guided by the priorities of the industrial policy of the state, emerged from the address of the President of the Republic of Tajikistan, the Founder of the National Peace and Unity – the Leader of Nation respected Emomali Rahmon to Majlisi Oli of the Republic of Tajikistan, according to the report for the month of 2018 products worth 121.5 million somoni. Growth in the volume of output compared with April in the month of 2017 is ensured by 137.9%. The volume of production compared with April in the month of 2017 increased by 33.4 million somoni.

Over the period of four months of this year, the enterprises of the industry produced a total of 445.2 million somoni, which is 107.7 million somoni more compared to the same period of the previous year.

According to the information of the enterprise management in May of the month of 2018, is provided additional connection of 25 pieces of electrolyzes.

The partners could not provide the company with petroleum coke, which is the main raw material. Due to this, the reserves of the boiled anode decreased sharply, as a result of which the production figures gradually decreased.

It should be noted that on April 4, 2018, natural gas was delivered from the Republic of Uzbekistan to a firm that receives 23 cubic meters of natural gas per day. The company buys natural gas in a neighboring country at a cost of $ 115.0 per 1,000 cubic meters.

Responsible persons of the enterprise stated that on the basis of bilateral agreements with Chinese firms it is planned to repair and update 300 electrolysis baths and their commissioning by the end of 2018.

Using the reserves and capabilities for April of this year, 1590.0 tons of aluminum was recycled. Over the four months of 2018, the enterprises processed 2140 tons of aluminum in general, by 990.3 tons less compared to last year for the same period (due to all processing enterprises), the rate of development of processing was provided by 68.4%.

State Unitary Enterprise “Machine Building Enterprise” on January 3, 2018 provided “Tajik agroleasing” with a draft of a bilateral agreement between SUE “Tajik Agroleasing” and State Unitary Enterprise “Machine Building Enterprise” in the amount of 4.0 million somoni for production of agricultural machinery in 2018. For the period of four months of the current year, the following products were offered: potato planter – 4 pieces, potato gathering – 4 pieces, grain crusher 6 – pieces, ram 68 pieces and 100 shares for the amount of 346.5 thousand somoni.

According to the information received for the four months of 2018, the enterprises of the machine-building, defense and chemical industries, together with SUE “Shirkati Aluminum Tajik” exported products from the following: primary aluminum, explosive industrial materials, aluminum profiles and metal wires for the amount of 429.1 million somoni in foreign countries, especially European countries, Afghanistan, Turkey, Iran and Turkmenistan, which is 93.3 million somoni more compared to this period of the previous year.

The main enterprises built in the industry.

LLC “Cryolite”, in order to use domestic raw materials and to provide SUE “Shirkati Aluminum Tajik” with aluminum fluoride and cryolite, in 2008 the construction of the “Cryolite Plant under construction” was started in the Yavan district. Its design capacity for the year is 18,000 tons of aluminum fluoride, 12,000 tons of cryolite and 100,000 tons of sulfate acid. This enterprise started its activity on the eve of the 25th anniversary of Independence of the Republic of Tajikistan, September 5, 2016 with the participation of the Leader of the Nation of the President of the Republic of Tajikistan, Emomali Rahmon.

In four months of 2018, LLC “Cryolite” sent 60 tons of cryolite to the company DEP Aluminum to the Republic of Azerbaijan via the railway line of 500 tons of aluminum fluoride to RusAl of the Russian Federation.

Thus, during this period, 94.0 tons of aluminum fluoride, 41.0 tons of cryolite were transferred to the GUP “Community Aluminum Tajik”.

Cost of produced products by the enterprise:

The need for electric power is 41 thousand kW / h for 1 year.

The coal demand is 26 thousand tons for 1 year.

At this company employs 537 workers, whose average salary is 2,500 somoni.

Thus, in the district of Spitamen of Sughd region, the company for the production of shaped metal pipes of round and square pipes with the capacity of 60 thousand tons of products per year with the use of modern technologies was commissioned by CJSC “Nord Asia Metal”, which resulted in the creation of 60 new job places.

120 new jobs will be created to start a full active activity. It should be noted that the company’s products have a high demand in the market. The enterprise is built by local and Chinese entrepreneurs and the main amount attracted in total is more than 5 million US dollars. The salary of the company’s employees at the moment is on average 2,500 somoni.

For four months of 2018 the enterprise produced products worth 47.7 million somoni, which is more by 20.6 million somoni compared to this period of the previous year.

The rate of increase in the output of the enterprise is ensured by 175.8%. The volume of production for this period increased by 7514, 5 tons, which is more by 1540.0 tons compared to this period of the previous year.

The variety of products in the production enterprise for density and volume of metal reaches up to 85 species, 40 of its species have a profile round shape, 45 species have a shaped square shape.

The cost of 1 ton of annual production of the company on the last account is 750 US dollars. During the sale on the domestic market, the company pays 18% of VAT and other compulsory taxes from the sales volume.

Similar to this enterprise, in the city of Gissar in September 2017, a new production enterprise, LLC “Production of Tajik pipes and profiles”, which produces shaped round and square shaped metal pipes, on the basis of which 27 new workplaces appeared in the enterprise, began its activity. The average salary of employees is 1200 somoni. Raw materials and metal sheets the enterprise buys and imports from the Russian Federation.

The recently founded enterprise in April 2018 produced metal pipes and round and square shapes for the amount of 3.3 million somoni. For four months of this year, the volume of production in the enterprise amounted to 12.9 million somoni.

The volume of production in this period is 2771.0 tons. The annual capacity of the enterprise is 2500 tons. 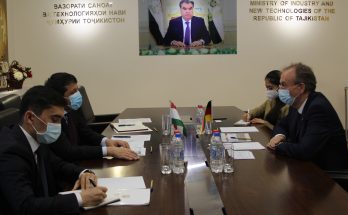